For every child. How santa claus got his Elves!

Logline: For Every Child… How Santa Claus got his Elves…an acronym for Everyone’s Little Friend!

by Dr. Paul A. Wagner

Logline: Resurrection: Rising from the Death of a Relationship.

Dr. Wagner’s Love Trauma compassionately explores the mighty divide that opens up when divorce or separation happens. His thorough and patient dissection of that divide allows divorcees to recognize the demons that keep us from getting beyond the divorce, the pitfalls of various post-divorce behaviors, and the procedures we can take to move past the pain. His examination of the divorcee’s viewpoint works like magic to make us feel we are not alone and indeed, that many people suffer the same kinds of indignities after divorce. But the examples of those who have got beyond it lift our spirits and make us believe surviving Love Trauma is possible.

by Dr. Paul A. Wagner

Logline: A Hand Book for the Divorced!

Navigating the After Divorce middle and upper class world of singles, ages 25-58. Discover the Three Intimacies and How they work together. Experience the wisdom of active adult singles as they talk about dating…from locker rooms to beauty parlors to dinners with friends and late-night sharing. Trying to start over with new relationships.
Bases on over 1,000 interviews/counseling sessions with Dr. Paul Wagner, where men and women share what they want in an ideal life partner. Who should consider re-marriage and who should not?

Logline: Dirty Harry teams with The Godfather to bend the law around Scarface. (Ends drugs, organized crime, drains the Swamp)

The impossible goal of Judd Rayburn, El Paso assistant district attorney, and his best friend, Zuni Indian special F.B.I. agent Joe Feather, is to win the war against the Colombian/Mexican drug cartels who supply the drugs crossing the Mexico border with the US.

After a huge, well planned drug bust at the Mexico border with members of the El Paso Police, DEA, ATF and Texas Rangers goes horrifically wrong, Judd and Joe begin to take the law into their own hands.

Enter Rikki Rhine, Navy fighter pilot and first female Top Gun winner, who just happens to be the former college flame of Judd Rayburn. She’s smart, pretty and daring. Together Rikki and Judd form their own jury. Through unforeseen circumstance, they meet the head of all twenty-three families of the U.S. based La Cosa Nostra, and actually find some common ground. It’s all about the money. Billions of dollars are involved in this high-stakes game of power, greed, deception and seemingly unfair justice. Whatever it takes to win.

Secret and forbidden romances abound in this international thriller. The cartel’s actions are beyond grievous, they’re heinous. The court room drama and unique solution to the problem of drugs in America will astound you. Can a form of Gray Justice legitimize organized crime in America and end the drug problem? And, as a side issue, clean up “The Swamp” in Washington, D.C.?

First book of a Trilogy

All the ladies love Wayne Tyler and he loves all the ladies. Able to impersonate just about any rock or country singer in the business to a tee, he is a talented musician and singer. When he auditions at Tequilaville, a new lakeside club near N.A.S.A. in Houston, Texas, he meets the lady co-owner, Abby Hawkins, a grounded business woman who is instantly smitten.

At their first encounter with Wayne, Abby tells her father, “Daddy Hank, it’s time to undo the laces” and takes the womanizer home with her, much to her Dad’s disapproval. After being falsely accused of sleeping with Abby’s free-spirited sister, Bella, Wayne gets drunk, hot-wires a boat and heads into Galveston Bay late at night to attempt suicide.

That’s when the supernatural explodes! Wayne is water spouted into another realm and is given three choices by his guardian angel, Gordon, a.k.a. Mr. Elroy, an old black blues singer. Wayne chooses to face his demons. Some are cunning, some are funny and often charming. Some are vicious with one aim in mind—to claim Wayne’s soul. If Wayne is victorious, his prize will be to learn what true love is. There are no guarantees in this unusual, beyond supernatural realm. Wayne may never return…but if he does, the rewards are great.

Logline: Wayne’s Angel on steroids! Demonic supernatural explodes on Mount Siphon, where demons hang out. Introduction of Dr. Helle Guyion, the most evil woman on the planet who literally unleashes Pandora’s Box.

Genre: Mainstream Contemporary Christian fantasy written from the point of view of a non‐believer. Unique: Pits human souls against satanic demons in another dimension.

Betwixt, the second book of the Wayne’s Angel trilogy, can best be described as Wayne’s Angel on Steroids! More supernatural, greater battles and the introduction of Dr. Helle Guyion, the most evil woman in the entire world. Her powers are beyond this earth as she begins to shape, manipulate and deceive our characters.
There is an modern day introduction of Pandora’s Box that defies the intellect of the world’s greatest scientists. It contains visions of the future displaying unknown formulas and a “dooms-day” bomb with a missing ingredient, causing nations to scurry for world dominance.
There are more unexplainable phenomena that leave Wayne Tyler, wife Abby, Daddy Hank, Robbie and Bella Cantrell in complete awe. As usual, Mr. Elroy, A.K.A. Gordon, Wayne’s angel , is present to calm their fears. And who is this new lady, Liz, that makes Daddy Hank’s world stand still?

In the Korean War, S. Korean soldiers unearth the ancient Silla treasure containing billions of dollars worth of precious stones, gold and a crown worth millions. Some of the soldiers under strict secrecy, smuggle the treasure to the U.S. Fifty years later the secret is out. People begin to die giving up information on where the treasure is kept. The S. Korean government wants the treasure back. Psychopathic killers appear and steal the treasure. The Harriet Roth Investigative Agency is hired to seek out the culprits and recover the treasure for the Korean group of soldiers who smuggled the treasure. All very hush hush. R.M. Morgan is a modern-day Mickey Spillane as he carefully and skillfully makes the treasure hunt a fantastic journey for the reader. An ending you won’t see coming.

Have You Seen a Dark-Haired Man with Burning Eyes?: An Odyssey of Faith and Love

You are about to experience the heart-warming and gut-wrenching, true story of Adel and Itchale. A story of love and loss of newlyweds who fled Poland after the Nazi invasion. This rigorously documented story is about a young woman’s search that initially seems hopeless and impossible, yet soon turns into a journey of adventure and survival against all odds. Adel’s journey not only spans two continents, from Europe to Asia, but also gives the reader a first-hand look at some of the history of World War II as she searches for her missing husband.

Dr. Shanun-Klein writes the incredible story in sharp observant simplicity, and with sensitive, poetic precision. She bases the book not only on her memories of stories she was told, but on extensive research she conducted to verify those memories as she traveled through the exact same landscapes, villages, towns and cities of Poland, Russia and Mongolia on her own journey. 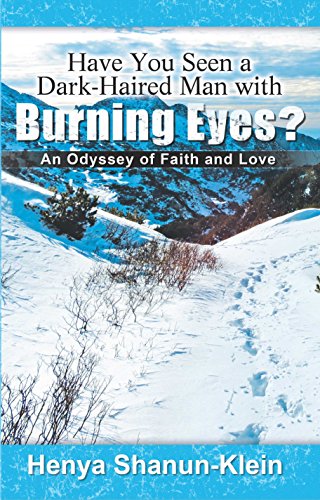 CALL FOR SUbMISSIONS AND LEARN ABOUT OUR SERVICES

Thank you... check your email for your free gift!

We value your privacy.  We DO NOT sell your email to ANYONE!